I saw the image below making its rounds on Facebook. It has the following caption:
“Why is this white man relevant to Black history? He was one of the Freedom Riders. In 1960, he was on a bus full of Freedom Riders who arrived in Montgomery Alabama where an angry white mob was waiting for them. He volunteered to get off the bus first and take the brunt of the mob’s violence, which left him beaten and bloody. His name was James Zwerg.”

Do we need to know or remember James’s name?

I argue that the answer is no.

I argue that circulating an image of him during Black History Month covered in blood as a martyr for the Civil Rights Movement is centering whiteness and his “allyship”.

Its great, if this story is true, that he stepped off the bus first and put his body on the line. But its not great that the sympathy comes to him for being a decent human versus the thousands of Black people who were beaten, hosed, attacked by dogs and murdered. Letting you know there were white people too feels very #notallwhitepeople to me. It feels very “The white guy on the podium at the Olympics with the Black Power fist protest thing was an ally too!”

He is a full grown white man. The reaction to his injuries is similar to what I admit I’ve felt when I’ve seen white parents of kids who were killed by police on TV crying. I feel like, “I feel so sorry they feel this pain, this pain isn’t for them.” We are so conditioned to give additional sympathies or praise for white people who are hurt in ways we have become accustomed to being hurt, believing that it’s a hurt reserved for us.

When people show photos of Black Panthers with shotguns, claiming they are terrorists, remind and advise that this here is what they were defending against.

What is this woman’s name? 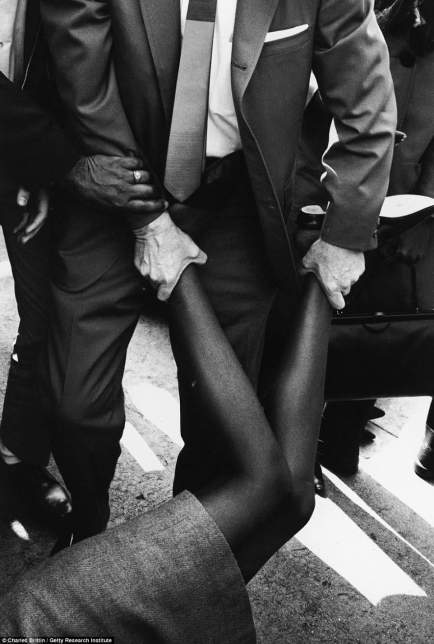 This woman in her tweed skirt, hose and heels couldn’t dress her way out of being attacked and manhandled as she protested Bloody Sunday in Selma. So the respectability politics can kick rocks too.

Can we remember Black people in February? Please? White people literally have every single other day of the year.

And thanks to 45/y’alls president/Orange Menace and his cronies, Abe Lincoln is who we need to remember and honor during Black History Month.

Like what you’ve read? Want to get hear more from Brown Girls Out Loud? Click the button below to support us on Patreon!

2 Replies to “Can we keep the BLACK in Black History Month?”

Join 162 other followers
Follow Brown Girls Out Loud on WordPress.com