The art of preserving family history has probably existed for as long as humans have had language. In general communication, I can imagine the first people passing down ways to find food, how to make tools and how to stay safe laced with stories about the people who taught them; their kin. It was passed down from person to person, generation to generation by a one or a few people in a family.

Though some Black Americans had stories themselves about ancestor who arrived from Africa, details were unknown. So much was lost in the forced adaptation to life as enslaved people, many families, like my own, only retained physical characteristics of being indigenous to an entirely different continent. We have been fractured. Our family lines literally scattered across the globe.

Early last year, I was speaking with a friend who asked, “What is something you can’t or wouldn’t buy for yourself but would really like to have?” My answer came fast, and simple. “An ancestral DNA test.”

I don’t know if my friend knew the true value of the gift she was bestowing upon me. As a child, we had school assignments where we were required to make family trees. On mine, I could never get past my great-grandparents. Though knowing the names of some of your ancestors three generations back is a huge privilege compared to some, I was keenly aware that some of my classmates were able to go back six or seven generations. That there were people who knew where their families came from. They had photos of their ancestors that were nearly a century old. I had classmates who could bring dishes from the countries where their ancestors departed to come to America. As a Black American, I had nothing dating back that far.

When I received the chance to take this test, I was excited and nervous. I was excited to have locations to research, cultures, religions, foods and names. I wanted to find answers that no one else in my family could provide. I was nervous about discovering who I was as well.

We had kings and queens. We had civilizations that we don’t know very much about. And as far as I’m concerned, my music is addressed to my people, especially, to make them more curious about where they came from. And their own identity and pride in that identity. That’s why my songs, I try to make them as powerful as possible, mostly just to make them curious about themselves. We don’t know anything about ourselves. We don’t even have the pride and the dignity of African people. We can’t even talk about where we came from — we don’t know! It’s like a lost race. And my songs are deliberately to provoke this feeling of, “Who am I? Where did I come from?”

I didn’t end up finding kings and queens but, I did find the regions from which my family was taken. 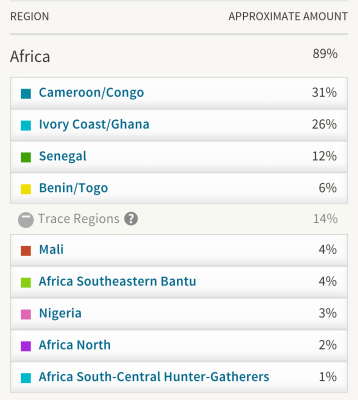 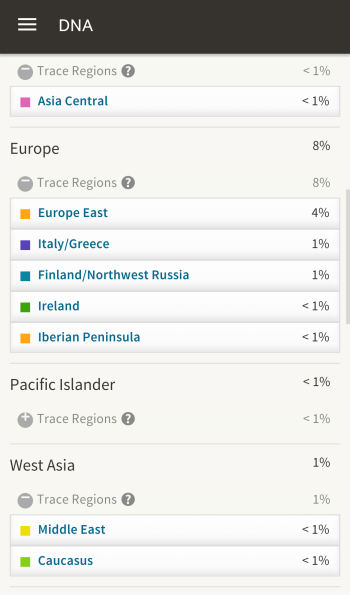 In researching my ancestry and my DNA, I have found that many of my friends were doing the same thing. One group of friends have been running raw data to see where we might might relations. We started a YouCaring campaign to raise funds to get ancestral DNA tests into the hands of activists. Helping people learn more about where they come from, giving back to them parts of what they lost, its incredibly meaningful work.

Here I am, researching my family for years via Ancestry.com and once I finally got my test, I found out that one of my friends had been researching her own family for years too. My friend Dani had become the genealogist in several of her friend groups. We put our heads together to discuss lineage and eventually she got me hip to GedMatch, where you can upload raw data from your DNA test and have it run through their database and search for family members. Its incredible.

In working with GEDMatch, Dani and Erica, another one of our friends, have been tracking the ID numbers of each of our friends to compare them with newly tested friends to see if there are any matches between us. And they have found plenty! Even though the matches seem to be many generations back, its enough for us. Its enough for us to know that we are all apart of a shared struggle. We are reunited today and that makes our ancestors, who are plentiful and powerful, pleased to see us reconnecting and loving each other.

We are a testament of resistance and survival. We are powerful and divine. We are a generation of grown up “play cousins” who are all real cousins, family, part of the same story, aren’t we? We have built virtual and material villages. We have jokesters, griots, medicine women, warriors, and healers. We celebrate each other, uplift each other. We hold hands with each other, through good days and bad ones. We are reclaiming what was stolen from us. I write so much poetry about the longing for home, asking for grace from my ancestors. And I think I’ve found them again in my friends. I know Sherronda wrote for us about millennial dating in the age of social media. But there is something to be said for friendship in the same era. Especially children of the diaspora. There is so much to be gotten from people you meet on these platforms on your electronic gadgets.

As millennial folks, we may “always have our faces in them damn phones”… I’ll give our critics that. But I’ll also add that we are breaking cycles of abuse. We are calling out harmful and violent systems and people to hold them accountable. We are building healthy boundaries. Sometimes that means cutting off your uncle or cousin who violated you when you were a child. Sometimes that means your mother is toxic and you need cut her off. Maybe you came out and your siblings disowned you. Maybe your teacher, someone entrusted to keep you safe, to teach you and inspire you, calls you the n-word.  But you know what? We have the ability to create intentional families. We have the ability to destroy oppressive systems and to walk away from unhealthy situations.

We deserve love and joy. We deserve to dance. We deserve to take root in rich, fertile soil. We can make our own. We have spent hundreds of years withering and lasting through each winter and every type of storm, illness or other harm oppressive societies have dealt us. But in watering ourselves, huddling together, shining light on each other, we are growing. We are blooming. And I know that our ancestors are pleased.

Like what you’ve read? Want to get hear more from Brown Girls Out Loud? Click the button below to support us on Patreon!