It has been a rough couple weeks. Yesterday, Asia wrote about recent current events and the emotional turmoil it takes on marginalized people, who are bearing the brunt of the Nation’s ignorance and shame.

It was well received by most and shared several times over on Facebook, which of course, we love. Although we center Brown Girls our audience is comprised of every type of person.

Then this response happened in a publicly shared post… 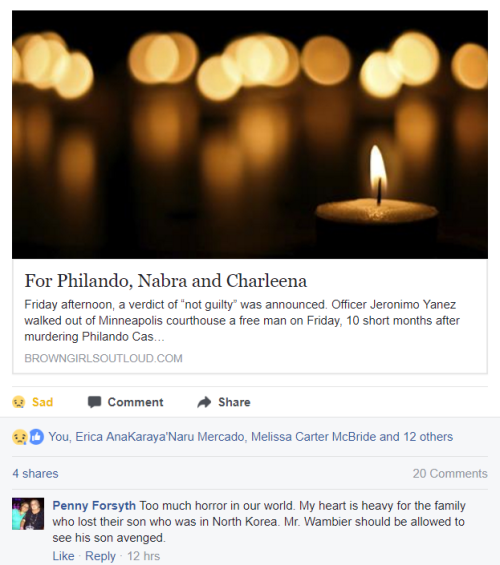 If you haven’t read Asia’s piece, I encourage you to do so now to put this post into appropriate context, in it she writes;

I am afraid. My friends, my village, we are all afraid of being next.

Carrying this collective Black grief of knowing multiple innocent people were killed because they were Black.

It is all together vulnerable, honest, and a poignant look at life living inside of her skin and in response, Penny says,

“Too much horror in our world. My heart is heavy for the family who lost their son who was in North Korea…”

She then goes on to say she feels the parents should be “allowed to see his son avenged.” There is no mention of Philando, Charleena or Nabra. No condolences  or sympathies expressed for their lives lost.

In her comment we get to see a most honest look into whiteness in America. We get to see exactly what prompts us to say #BLACKLIVESMATTER. It is a pure and unadulterated look at how insidiously selfish white supremacy is.

Living in the world with white people like Penny, who are emotionally stunted, over-sized brats, is quite exhausting to be honest. It doesn’t seem like growing into emotional intelligence is even something white people feel like they want or need to do either.

The cognitive dissonance in response to the very real dangers non-white people are living in, is obvious. People like Penny make it very, very hard not to light a match and burn this entire dumpster fire of a nation to the fucking ground.

“Too much horror in our world.”

Ok girl…that’s the truth. There is too much horror in the world. From there, however, it takes an irrelevant turn…

“My heart is heavy for the family who lost their son who was in North Korea.”

Penny skips over the three lives mentioned in the article (and literally there in the title) and she does so purposefully and deliberately. Instead of acknowledging these tragedies, she then goes on to say,

“Mr. Wambier should be allowed to see his son avenged.”

Oh Becky, you just said a fucking mouthful and you showed your ass. Your whole entire, pathologically violent, pale ass. Now we shall drag it.

I’m gonna start by reminding everyone out here in these internet streets that scrolling past any single thing you encounter is absolutely, 100% free of charge. If you can’t even pretend to feel something then don’t fucking stop to comment.

It’s obvious the majority of white people don’t care about these victims. Her comment makes that abundantly clear. “But she doesn’t speak for all of us!”, I hear you screaming at me in the comments.

Fair enough, you most likely fall into a group that cares but can’t muster up enough courage to call out this lack of empathy from the rest of your skin folk. “But I’m not a racists!”

Stop yelling, you are all racist because racism is more than white hoods and the constant use of the n-word. It’s sliding into a thread about police brutality and toxic masculine rage and erasing the victims completely with no thought or care to how that might be received by the author, their audiences.

There is a large majority of you who actually approve of and condone violence against non-white people, even if you can’t admit it, your President reveals you.  The truth is y’all haven’t cared about non-white people in all these hundreds of years.

Therefore, I’m gonna need all you Pennies to shut the fuck up. Completely. Can you manage that?

Also, FUCK. OFF. PENNY.  YOU SPECIFICALLY. FUCK OFF!

Her hope that this family be “allowed” to see their son avenged really shows the truth of whiteness though because as sure as I am a Brown girl out loud is as sure as I am he is not worth going to all out war over. I’m not sorry for thinking that either.

Whiteness is violence and the proof is in Penny’s simple little, final wish for vengeance, even if it costs hundreds of thousands of innocent people their lives. This white man is worth that to Penny. She doesn’t care, his family should be “allowed” this because whiteness should always be “allowed” violence while the rest of us should just be silent casualties.

May the ancestors drag these sociopaths straight to hell.